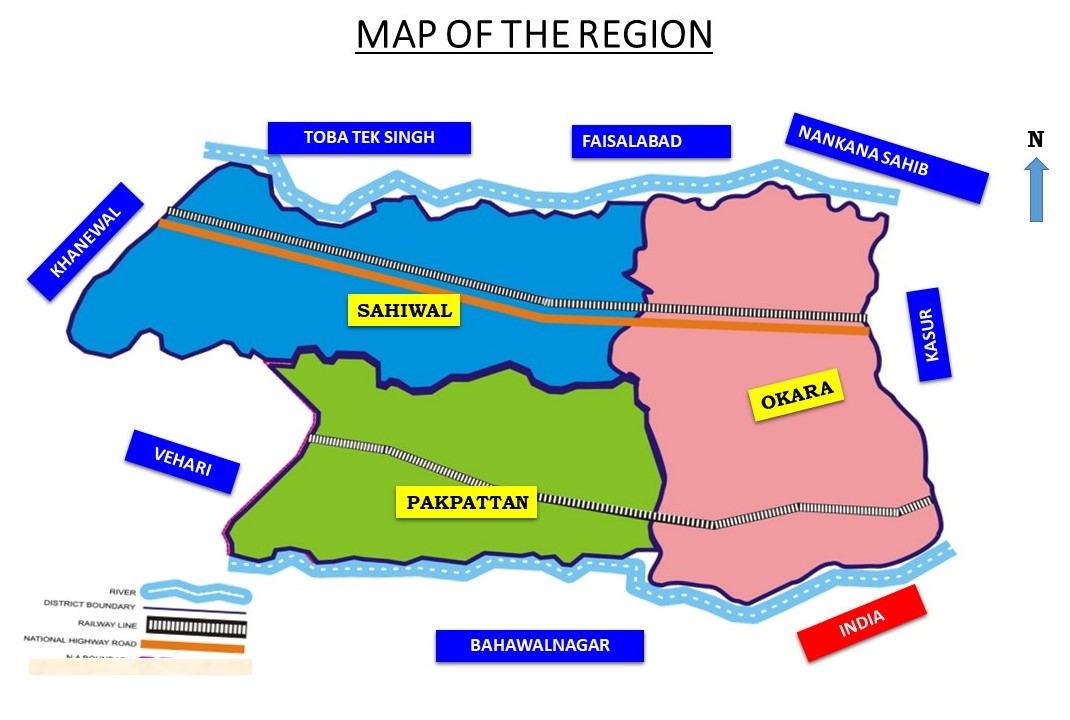 Sahiwal is a District of Punjab Province. The Ex name of this district was Montgomery. According to the census of 1998, it had a population of 1,843,194 people. Since 2008, the Sahiwal District, has become the Region comprising of Sahiwa, Okara and Pakpattan Districts.
HISTORY  In 997 CE, Sultan Mahmud Ghaznavi, took over the Ghaznavid dynasty empire established by his father, Sultan Sebuktegin, In 1005 he conquered the Shahis in Kabul, and followed it by the conquests of Punjab region. The Delhi Sultanate and later Mughal Empires ruled the region. The Punjab Region became predominantly Muslim due to missionary Sufi saints whose dargahs dot the landscape of Punjab Region. After the decline of the Mughal Empire, the Sikh invaded and occupied Sahiwal District. The Muslims faced severe restrictions during the Sikh regime.

The Sahiwal District has been settled from the pre-historical era. Harappa is an archaeological site, about 35 km west of Sahiwal, that was built approximately 2600 BCE.
Sahiwal District was an agricultural region with forests during the Indus Valley Civilization. The Vedic period is characterized by Indo-Aryan culture that invaded from Central Asia and settled in Punjab Region. The Kambojas, Daradas, Kaikayas, Madras, Pauravas, Yaudheyas, Malavas and Kurus invaded, settled and ruled ancient Punjab Region. After overrunning the Achaemenid Empire in 331 BCE, Alexander marched into present-day Punjab region with an army of 50,000. The Sahiwal was ruled by Maurya Empire, Indo-Greek kingdom, Kushan Empire, Gupta Empire, White Huns, Kushano-Hephthalites and Shahi kingdoms.
The District came under direct British rule in 1849, when the district was officially formed with its headquarters at Pakpattan. The District was expanded to include the trans-Ravi portion in 1852, and the district headquarters were moved to Gogera. In 1865, when the railway was opened, a village on the railway, was named Montgomery and became the capital of the District. During the period of British rule, Sahiwal District increased in population and importance.

During the Indian Rebellion of 1857, there was a general rising of the Jat clans, the district formed the scene of the only rising which took place north of the Sutlej. Before the end of May 1857, emissaries from Delhi crossed the river from Sirsa and Hissar, where open rebellion was already rife, and met with a ready reception from the Kharrals and other Jat clans. The district authorities, however, kept down the threatened rising till August 26, 1857 when jail prisoners made a desperate attempt to break loose. At the same time Ahmad Khan, a famous Kharral leader, who had been detained at Gugera, broke his arrest and, though apprehended, was released on security, together with several other suspected chieftains. On September 16 they fled to their homes, and the whole country rose in open rebellion. Kot Kamalia was sacked. Major Chamberlain, moving up with a small force from Multan, was besieged for some days at Chichawatni on the Ravi. The situation at the civil station remained critical till Col. Paton arrived with substantial reinforcements from Lahore. An attack which took place immediately after their arrival was repulsed. Several minor actions followed in the open field, until finally the rebels, driven from the plain into the wildest jungles of the interior, were utterly defeated and dispersed. The British troops then inflicted severe punishment on the insurgent clans, destroying their villages, and seizing large numbers of cattle for sale.
The Region was traversed by the main line of the North Western Railway, from Lahore to Multan. It is irrigated by the Upper Sutlej inundation canal system and from the Ravi. The sites of Kot Kamalia and Harappa contain large mounds of antique bricks and other ruins left by the Indus Valley Civilisation.
The District comprised three towns and 1371 villages. Its population was 360,445 (1868), 426,529 (1881), 499,521 (1891) and 497,706 (1901). In 1901, 72% of the population were Muslims, while Hindus and Sikhs formed 28%.

The District was part of the Lahore Division of Punjab. The predominantly Muslim population supported Muslim League and Pakistan Movement. After the independence of Pakistan in 1947, the minority Hindus and Sikhs migrated to India while the Muslim refugees from India settled in the Sahiwal.
Agriculture is important to the local economy, particularly the growing of cotton, grain, potato, wheat and rice exported all over Pakistan and around the world.